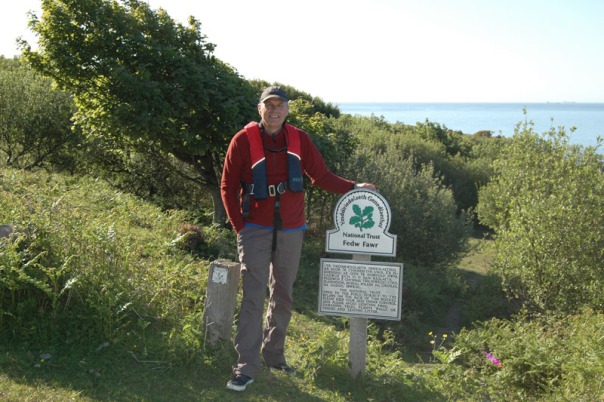 The voyage was part of the 50th anniversary celebrations for the Neptune Campaign, which was set up in 1965 to enable the NT to buy unspoilt areas of coastline and protect them for future generations. Richard is the NT Wales Coast Project Manager responsible for working with local Rangers to implement its strategy for the 157 miles of Welsh coast it owns. He and John Whitely, a Glan Faenol Ranger who owned a yacht, sailed around our coast to visit the 133 coastal properties and meet local NT staff.

In addition to protecting the sites, the NT manages them to increase their biodiversity. Those of us who have been on Summer walks led by local NT rangers know that the key to this is the right grazing regime using cattle, ponies and sheep. However the NT increasingly has to look at the impact of rising seas levels on its coastal properties. Locally Abereiddi, Newgale and Freshwater West have, or will need, to be managed as the sea breaks through the existing defences. Planning this requires communication, not just with local staff but also tenant farmers and the wider community.

Richard also talked about the voyage itself and some of the difficult areas of coastline that had to be navigated. After getting grounded on the River Dee, he and John had the excitement of navigating the races between various islands and the adjacent shore. It made him understand that the sea is the master of what happens along the coast. 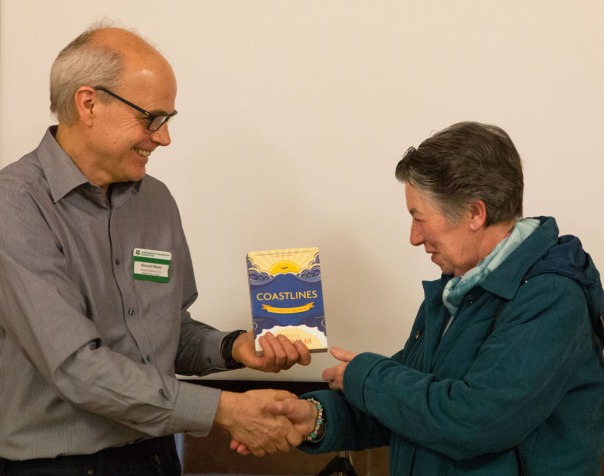 Our speaker presents the prize following a raffle that raised £52 towards the restoration of the grave of Fanny Talbot, at Barmouth. Mrs Talbot donated the first property to the National Trust, in 1895.